When does blastomere exclusion from compaction increase and what effect does it have on the embryo?

More blastomere were excluded from compaction in embryos with irregular cleavage, resulting in lower blastocyst development rates, but no decrease in pregnancy rates at transfer.

What is known already:

It has been reported that many of the chromosome analysis results of blastomere excluded from compaction were aneuploid, and pointed out that this exclusion may be related to the repair of blastocyst euploidy, but the effect of the number of excluded blastomere has not been reported.

This is a retrospective study of 578 embryos that developed into morula with time-lapse monitoring by EmbryoScope (Vitrolife) in 2018-2019.

The target embryos were classified into two groups: embryos with normal first and second cleavage (normal cleavage group) and embryos with irregular cleavage (dynamics of one cell dividing into three or more cells), called “direct cleavage”, at either cleavage (DC group), and the number of blastomere excluded from compaction during morula formation was recorded and compared. The blastocyst development rate and single blastocyst transfer pregnancy rates of the two groups were compared.

Main results and the role of chance:

There are 286 in the normal cleavage group and 292 in the DC group. The mean number of excluded blastomere was 0.76 and 3.55, respectively, which was significantly higher in the DC group (P<0.01). Good blastocyst (Gardner classification 4 or higher) development rate was 84.5% (239/283) and 65.8% (181/275), respectively, and high grade blastocyst (Gardner classification BB or higher) development rate was 43.9% (105/239) and 14.9% (27/181) of them, both significantly higher in the normal cleavage group (P<0.01). The single blastocyst transfer pregnancy rates were 31.6% (25/79) and 32.4% (11/34), and the miscarriage rates were 24.0% (6/25) and 27.3% (3/11), respectively, neither was there a significant difference between the two groups. So, direct cleavage increased the number of blastomere excluded from compaction, decreased the rate of morula to good blastocyst development and reduced blastocyst grade, but did not affect blastocyst transfer pregnancy rate and miscarriage rate.

Please note that all target embryos must have developed into morula or larger (embryos that did not develop into morula will not be included in the study).

Wider implications of the findings: 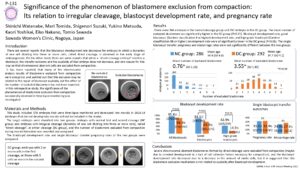